A beam of light emitted from a sun travels 150 million kilometers to hit on our retina then, we will say there’s a sun. But, the sun that you have just seen is actually about 8 minutes old. Because light also takes time to travel at that distance. So, the first thing you should know is “light carry information”. For this case, light carried information about “there is a sun”. You may wonder why I’m using light to receive information? Isn’t there are another medium?

Suppose, there is a bomb blast (strictly speaking, an event happen in the spacetime) at 1 kilometer from me. Believe or not, the only way you could get the information that there is a bomb blast is by hearing through your ears or by seeing through your eyes. Let’s say I’m blind, so the only way I could get information is through hearing. As soon as it blasts, the sound waves will take around 3 seconds to hit on my eardrum. Because in one second, sound waves can only travel 343 meters. i.e. velocity of sound is 343m/s. Now, I will know there is a blast then, I will note the time. Let’s change the scenario that I can see but cannot hear. If a bomb is blast, light waves will travel at that distance with seemingly takes no time. Because in one second, light waves can travel 299792458 meters which is very very large compared to the 1000 meters. Finally, I will see the difference in the time for the same event but from two different cases. In conclusion, the fastest way you could get the information is through light. Because most of the observers are us regardless there are signal detectors. So, in 1905 Einstein's theory of special relativity (strictly speaking, in Lorentz transformation), he suggested the speed of light as a limit for a particle can travel, and the fastest carrier of information.

In 1907, Minkowski realized that his former student Einstein’s theory can be interpreted in a four-dimensional mathematical space (don’t be confused with physical space, simply space) which is known as the “Minkowski spacetime'. After some years, Einstein used this framework to describe gravity in-terms of geometry, known as general relativity (GR) and realized Minkowski spacetime is a flat spacetime. In special relativity, we also need to deal with a skew coordinate system which uses contravariant/covariant vectors and it can be a tedious job to do. In 1949, Dirac when formulating the relativistic dynamics of atoms, he introduced a coordinate system (now known as lightcone coordinate system) which allows us to describe geometry when Lorentz transformation is applied. Thus, minimizes our task.

In this post, I’m interested to introduce the light cone coordinate system in 2D flat spacetime (for simplicity) and the distance associated with it. This type of coordinate system can be extended to curved spacetime (strictly speaking Pseudo-Riemannian manifold) of GR which might help us to understand the propagation of the gravitational waves [If you want to go further, read this]. But, this is out of the scope of this post.

We are doing this so that we can clearly separate the particle which has a velocity less than the velocity of light. This means, in the spacetime diagram, the line which is inclined by $45$° is a path (strictly speaking, called a null path) where light can only travel. This is because the slope $tan(\theta) = \frac{\text{distance}}{\text{time}} = \text{velocity}$ in the spacetime diagram, and $\theta = \tan^{-1}(1) = 45$°. Thus we construct a visualization in the spacetime called light cone. Inside the lightcone, there are particles whose velocity is lesser than light and their paths are called timelike. Outside of it, there are particles whose velocity is greater than light and their paths are called spacelike. But, in nature, we have not seen any particle which can travel in a spacelike path. So, our spacetime diagram looks like this: 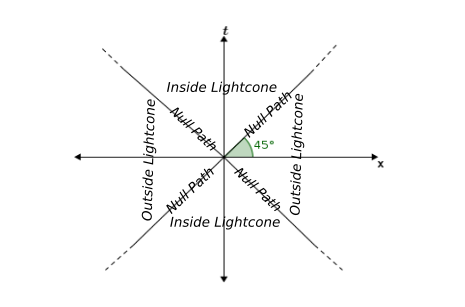 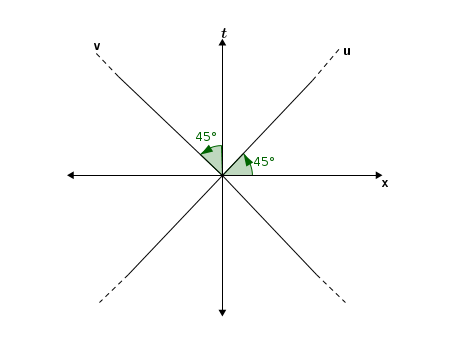 Now, let’s move to our another proposal. In order to preserve the Lorentz invariance (which says the distance between two events is always same in whatever coordinate system, i.e. proper distance), we need to multiply $u$ and $v$ so that we can form a distance formula given by special relativity. i.e.

Finally, the proper distance between two events for the Dirac’s lightcone coordinate system is $d = \sqrt{2uv}$. This type of coordinate system can be very helpful if you want to study causal relationship between the events (for example, in Causal Sets Theory [1, 2, 3], a candidate theory for Quantum Gravity), and maybe it help us to solve the problem very quickly.

In the next post, I will be presenting you the “Lorentz transformation in-terms of hyperbolic rotations”. I hope you will keep your patience alive.

If you guys have some questions, comments, or insults then, please don’t hesitate to shot me an email at damodar[At]physicslog.com or comment below.

Consider donating to an animal welfare charity in Nepal!

Can you really measure distance between two points?

I will talk about the issue of length on Quantum Gravity

What you always need to know about Quantum Gravity?

To explain about the conception of space, time and gravity from past to present.