Before we proceed for the exploration, let you rejoice with the historical background of Ising Model.

Spontaneous magnetization is a very peculiar property of the ferromagnetic material. So, many physicists in the early twentieth century found this phenomenon curious. Physicists lacked a good theoretical model until Ernst Ising introduced one now known as the “Ising Model”, in 1925. But, the credit goes to his doctoral advisor Wilhelm Lenz, who gave it as a problem to him. It is believed that Lenz had this idea first in 1920. I shall quote here the English translated resume 1 from his Dissertation:

I, Ernst Ising, was born on May 10, 1900, the son of the merchant Gutsav Ising and his wife Thekla, at Löwe, Köln. Shortly thereafter my parents moved to Bochum, Westfall, where I started school in Easter 1907. I received my diploma at the Gymnasium there, in 1918. After brief military training, I began my studies of mathematics and physics at Göttingen University in Easter 1919. After an absence of one semester, I continued my studies in Bonn, where I studied astronomy among other things. Two semesters later I went to Hamburg. There I turned especially to the study of theoretical physics at the suggestion of Professor Dr. W. Lenz, and at the end of 1922, I began under his guidance the investigation of ferromagnetism which led to the results presented here.

Ernst Ising’s analysis of a linear chain of two-state spins (i.e. +1 and -1 ) using his eponymous model was unusual at that time. His work on the one-dimensional system showed there was no phase transition at finite temperature. He then concluded that there will not be a phase transition in higher dimensional systems. He asserted this conclusion without any mathematical proof, simply extrapolating from his one-dimensional result. This statement proved to be erroneous, as demonstrated by Lars Onsager in the two-dimension version of the model. This discovery garnered much attention and Ising found himself an unexpected celebrity.

Now, we are ready to explore the basic intuition of this model.

At the same time, Stern and Gerlach were working in the same institute on their famous experiment on the quantization of the magnetic field of an electron. The idea so far developed was that the atom which has magnetic property consists with magnetic dipoles, and these dipoles have a limited number of orientations (i.e spin up and spin down). With this concept, Ising assumed the field created by these dipoles will only result from the interaction between the atoms and damped very soon.

So, our first question will be, How one atom’s spin will interact with other spins?

Suppose, we have a two-dimensional sheet of paper at which on each lattice there are either one of the spins. We assume spin up (+1) by the up arrow and spin down (-1) by the down arrow in the below figure: 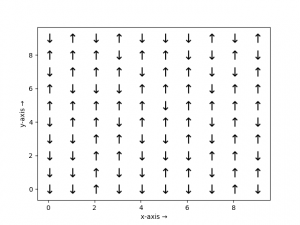 Again, Let’s make our question interesting! What if the first randomly chose spin is spin down! Now, What will be the probability of that spin which we have said earlier that, it is greater than one-half? Logically, It’s lesser than one-half [Think about for convincing yourself with this answer. If it contradicts your thoughts then, comment below!].

This approach was used by Peierls. His proof is mathematically intuitive and showed the presence of a non-vanishing spontaneous magnetization in Ising 2D model.

In the numerical simulation, it is possible to simulate this model and can gain relevant observable thus, produces results that can be comparable with the theory. You can find a full and up-to-date software at “Ising 2D model Simulator”.

If you guys have some questions, comments, or insults then, please don’t hesitate to shot me an email at [firstname][AT]physicslog.com or comment below.

You can support my work by donating a Coffee or Nepali Chiya (चिया)!